This will reopen the national disgrace of Palin’s glaring unfitness for office, and thus, irresponsible and negligent behavior by McCain and his staff for not properly vetting her before choosing her as VP on the ticket. Kudos for HBO – which has a long track record for producing fact-based dramas and relevant programming which have won more Emmys than any other network – for reminding us during this election year of our responsibility to beware of candidates so inept and woefully unprepared to run for national command office. 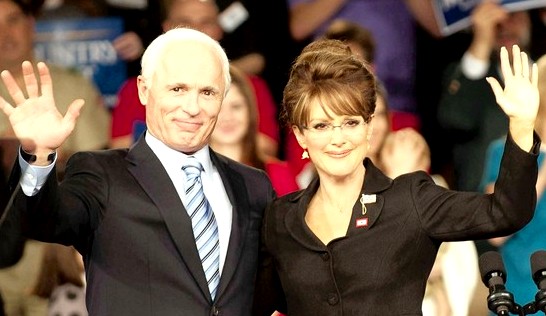 “Game Change,” based on the 2010 book of the same name by journalists John Heilemann and Mark Halperin, has been vouched for accuracy by McCain’s very own strategist, Schmidt himself, and by chief ’08 Palin aide Nicole Wallace. Also, Chris Edwards, one of Palin’s ‘08 campaign staffers, served as a technical advisor to the HBO filmmakers.

But ardent Palin supporters (why in the world are there any?) will choose once again to ignore obvious truths about Palin who has already dismissed this film with her usual paranoid response to media bashing: “Here they go again!” May they never stop “going again” if it exposes Palin’s continued ineptness for public office or even as a national spokesperson to satisfy her power ego. Parroting conservative dogma, never offering a single original thought, and simply tearing down the opposition for its own sake does not make a credible candidate for any office or job including parking cars or cleaning kennels.

John McCain’s “Country First” campaign motto was a shameful, utter lie. McCain knew he could never win the presidency with yawn-boring old suits like Romney or Huckabee for his VP, and wanted American voters to think he was making a bold, new-generational move to thwart the Obama Express by picking much younger, female, unknown Palin. The fact he hardly vetted her clearly shows how shallow and manipulative his decision was, and how desperate his staff was to find an atypical running mate and shake things up. Schmidt has admitted, “My judgment was influenced by ambition to win the race.”

If McCain had known that silly Sarah was so intellectually challenged she would inanely claim that the proximity of Alaska to the Russian border gave her foreign policy expertise, or that the Queen of England was the head of the British government, would he still have picked her if she guaranteed him a win? Absolutely! You bet he would have, because all John McCain wanted was to become president at absolutely any cost, including the unacceptable cost to our nation’s well-being. Given McCain’s age of 72 (in 2008) and his history of heart trouble, Palin as president was a very possible disaster nightmare for our country and the world. Even if McCain cringed at thoughts of her possible succession (as surely he must have now that we know the real story), his megalomania for power at any cost ruled the day. “Country First” my butt! That was blatant “Country Last—JOHN FIRST!”

Besides Palin’s frighteningly huge gaps of basic intellect awareness, proven repeatedly in national interviews, the book and film reveal that senior campaign aides were alarmed by her behind-the-scenes emotional outbursts, and were horrified to discover she was at times “catatonic” and possibly mentally unstable. Schmidt said of this film, “That is the story of what happened; it tells the truth of the campaign.” The consensus among McCain ’08 aides is that picking Palin was a terrible mistake. Schmidt agrees, “The result was the VP nomination of someone who was fundamentally not qualified. I have great regret over that.” So does America, Steve.

Proving once again his own ineptness of judgment and repudiation of the obvious truth, cowardly McCain recently declared: “It will be a cold day in Gila Bend, Arizona, before I watch that movie.” Yes, John, continue your shame of denial for not vetting Palin…as a supposed patriot. For the rest of America, and Gila Bend…don’t miss this important HBO film!

(Some of this text is excerpted from my memoir KISS ME QUICK BEFORE I SHOOT. Quotes and film facts are from the Los Angeles Times story on “Game Change” written by James Rainey on 2/18/12. Photo by Philip Caruso, HBO)