To enter our weekly giveaway of a signed free copy of Kiss Me Quick Before I Shoot check out these five excerpts and vote for your favorite below. Winners will be notified.

Though Jim reeked talent, no one would have guessed he was going to become one of the greatest filmmakers of our time.

The steps could now be heard just a few feet away from the other side of the door. NOW! I unlocked it, flung it open, and screamed like a maniac, “AHHH!” as I wound up the machete over my shoulder, ready to swing it down and decapitate the intruders…uh, well, if need be! 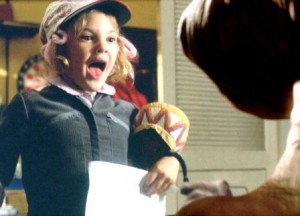 Right in front of me, with bug-eyes and screaming even louder than me “AHHHHHH!” were two females, terrified out of their minds! There stood my wife Jacqui’s friend Ildiko, and her eight-year-old daughter Drew Barrymore! Yeah, that Drew!

I almost decapitated poor Drew, who was screamin’ in fear of the crazy wild man about to swing this frightening machete down on her. She looked as terrified as when we had all seen her famous scream upon meeting Spielberg’s E.T. just a few months earlier on our movie screens! Sorry Drew.

I’m not a fan of traditional weddings. It’s supposed to be the most special and happiest day of your life. The same night I proposed in Jamaica, I mentioned to Jacqui I did not want a formal wedding, and wished to do something more romantic, more unique, more fun.

She looked perplexed, but intrigued. “And what time period were you thinkin’ about?”

I wasn’t sure how this was going to sound, but I decided to just go for it. “A romantic time period…you know…with harpists and costumed dancers and jugglers, and a horse and buggy to bring you in, and hooligans to kidnap you in front of our guests, and you screamin’ for help, and a knight in shining armor to rescue you, and sword fights and duels and…” I stopped as it sounded too huge even to me, like a blockbuster movie.

She looked a little baffled. Well, more than a little. She smiled, and with no hesitation, she said, “Wow! Sounds amazing! What a great idea. Let’s do it!”

A DUEL FOR THE BRIDE

Once the breathtaking Jacqui arrived and got off the flowered carriage in the middle of 300 open-mouthed guests, four “scoundrels” in costume regalia unsheathed their swords, grabbed Jacqui (who feigned a helpless maiden), and announced they were kidnapping the bride.

“Unhand that woman for she is mine!” The hooligans froze in their tracks when my booming voice erupted. The hero had arrived. Everyone applauded. I exchanged nasty words with the scoundrels, and then we drew swords. It was a riot. I had rehearsed this blazing sword fight with my actor/stuntmen buddies the day before; now, with adrenaline pumping in front of 300 guests, we almost killed each other! Thankfully they remembered it was my wedding day and the plot was for me to win the maiden’s hand. I rescued my princess just like in the movies.

It was my Errol Flynn life moment! 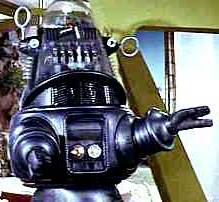 The radiation department is spooky with WARNING and DO NOT ENTER signs everywhere, strange buzzing sounds, rotating red lights in hallways, and weird-lookin’ staff walking around with heavy rubber gloves (just kiddin’ about weird-lookin’).

You lie on a gurney facing a gigantic machine with a huge lens that looks right out of the Twilight Zone. It rotates around the room, makes scary, loud knocking sounds, and it looks like…well, it looks like Robby the Robot in the 1956 cult classic Forbidden Planet! Remember the robot with the bubble head?

It gets worse. The techs put goggles on you and tell you to keep your eyes shut tight no matter what! NO MATTER WHAT? And they assure you that if you have any problems, you can just yell (YELL?) in the direction of the microphone and they’ll hear you from where they’ll be, which is 10 MILES AWAY! Behind very thick lead walls! That’s how it goes down, ask anyone who’s done full-body radiation. The process feels like bad sci-fi from the ’50s.

And one last thing: When you’re done with your 20-minute zap, you turn over so they can zap your other side, just like steak on a grill. Medium well-done, please!