Regardless of what Oscars and Golden Globes tell us, it’s difficult in any one year to get full agreement on the best movie of the year, or even the best movies of all time as per the American Film Institute’s polls. Motion pictures run the gamut of subjective opinions as all art works do.

It may be easier to choose films that are superlative within a more reflective period of time – maybe a decade – a top ten over ten years seems possibly more amenable to consensus. Ten years would seem to give us a workable barometer to consider and compare.

How do we get engaged and emotionally invested in a movie? What makes a top ten? Simple: a great story and great storytelling. Of course, it all starts with a great script, but then the magic of great filmmaking is all about execution and how did all the elements from acting to locations to photography to wardrobe to sound to visual effects to music etc…come together under the “production values” banner. And the person who gets to create and wave that banner within their own visual style is the director. For me, a shoo-in for top ten of the first decade of this century is an easy choice: Green Zone directed by Paul Greengrass, made in 2008 and released in 2010. The first time I saw this film, its magical breath of cinematic storytelling blew my mind. I’ve seen it maybe ten more times on TV and each time I thought to just watch for a few minutes only to be mesmerized till the end by this amazing, all-engrossing film.

In my opinion, this is a true masterpiece of filmmaking which didn’t get its proper due as it was marketed as an action film though it was so much more. Made for $100-million, with a US domestic boxoffice of $34-million, the film was deemed a flop. Americans were not quite ready for Iraqui war films or to face the difficult politics behind that war. Though it also sold $60-million in foreign ticket sales and was a strong DVD action seller, it received political criticism including anti-American and anti-war (God forbid!) commentary—which it wasn’t at all. Some labeled it an anti-government film which was ridiculous unless you think we should never question any government decisions including ones that proved to be completely misguided, never mind outright lies. The main plot of the film is indeed a race to silence those very lies.

If you missed it, make sure you see this film or go see it again. It’s one of the most important films of the decade as it deals with the Bush/Cheney circus of going to war with Iraq over WMDs—which of course did not exist. The plot is about an Army officer (Matt Damon) who is put in charge of finding the weapons of mass destruction but keeps coming up empty. The story is relevant even today as we are finally pulling US forces out of Iraq by the end of this year. We started this war for the wrong reasons and though we got rid of Hussein, the Iraquis are nowhere near ready for any kind of imported democracy whatsoever. I agree with all who predict chaos and civil war will break as soon as we leave until an army strongman will take over “for the welfare of the country” and Iraq will again be a brutalizing hellhole for its people. Unfortunately, that’s been their dance throughout their history…just too many stubborn and hateful religious factions to ever get along, thus they can only be ruled by brutal dictatorships.

Damon is at his best commanding the screen as the seasoned leading man he has become—kudos to him for one of his truly superb performances. The rest of the cast is equally brilliant. But the ultimate kudos go to its British filmmaker Paul Greengrass who is a masterful director and has quickly become one of the finest craftsmen in our industry. Paul also made the important and excellent United 93, and the two actioners The Bourne Supremacy and The Bourne Ultimatum. For me, the most amazing production values were the location settings where this film takes place. I was stunned to see it was shot in the middle of a war zone. How did they do this? Production notes state the film was shot in Morocco, Spain, and the UK, yet I was truly amazed by what seemed to be actual Baghdad locations. There must have been some second unit work done in Baghdad, but if indeed none of it was shot in Iraq, then the art department and visual effects teams were genius on this film. 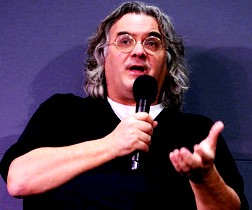 Paul has said about his film: “The past is very important to look at and this film tells what went down to get us into this war. How they manipulated, lied to, misled us, and used the press to do it. Cinema has got to be a redemptive experience. It does have to speak to our ability to move forward. It means you can go to the dark places and examine, through a really clear, action-dominated story, you can take that journey and then feel released. You get to see how it all went down. And by living through it with a moral hero, now you’re ready to move on.”

Redemptive indeed…go see Green Zone…again and again. I tip my hat to Paul Greengrass for making a spectacular film – a top ten of the decade in my book – and since I went to film school in London and started my career there, I say to Paul: “Bravo and well done, mate…a pint of Guinness on me!”

3 Responses to GREEN ZONE: Top Ten of the Decade