“Yo Bubba, can we try that again…except this time try not to kill the guy!”
I remember giving that direction to Bubba Smith on the set of Blue Thunder in 1984. I was teasing him about rough-housing a stuntman bad guy at the end of a chase, but hey, I was talkin’ to one of the greatest – and baddest – defensive ends in the history of the NFL, a Super Bowl V champ.

This was Bubba’s first role as a series regular and he played a detective partnered with another NFL legend Dick Butkus. They both did the police legwork on the ground to support the chopper team in the sky starring James Farentino and Dana Carvey in the Blue Thunder.

Of all the actors I have ever had the privilege of working with, I can truly say Bubba is high on the most memorable and fun list. He was a special soul, a gentle giant, as kind and caring on a film set as he was feared and terrifying to every quarterback that ever faced him on the gridiron.

A few months after directing him, I invited Bubba to my wedding. I recall he was mobbed by all the kids who knew him from TV as the baddest football star, and now he was their gentlest pied piper hero. Farewell my friend. 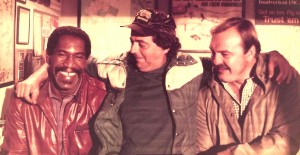 Photo: Bubba and me and Dick Butkus on the Blue Thunder set.