When I heard about the Cowboys & Aliens project, my first thought was “Wow, what a pitch that must have been!” Talk about a high concept title and certainly an unusually daring idea. So imagine being a fly on the wall during development with execs from Imagine and DreamWorks and Universal trying to put this thing together.

First, a director they can rely on to tell this wacky story and pull it all together. Since Iron Man and its sequel did so good and was packed with CGI, let’s bring in Jon Favreau. Jon is a talented good guy (I briefly played poker with him) and has proven to be a much more exciting director that can deliver commercial flicks than his acting chops have delivered. “From the director of Iron Man” will look good on the poster. Hire him and pay his freight! 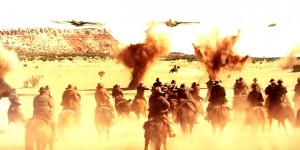 Second, who do we get to star in this thing? For the mysterious weird dude with that wacky wristband let’s bring in James Bond himself who can play hardcore and kick some butt. Pay his freight! But geez, for a projected budget of over $100-million, we’re gonna need some big-ass name to insure a couple of good weekends. How about Indiana Jones himself? Too old? Hell, John Wayne played an old cowboy in True Grit and that worked. OK let’s bring in Harrison and pay his freight. And enough big time expensive producers to choke any studio budget!

I haven’t seen the film but I think it’s safe to say that everyone in the industry was stunned when all of that money and hard work was edged on opening weekend by a bunch of SMURFS? What? How can that be? Well, I can guess that such a film is put together by a committee of very scared people trying to avert all possible risks…usually, that means a water-downed storyline with all the good human stuff and cool/bold ideas carved out, homogenized for broadest bland mass appeal, and amp up as much as possible the “wow” CGI effects. As usual, bombard the audience with lots of booms and hope no one has time to think rationally about this story…or concept which obviously they didn’t trust.

Thus, there are three writers with story credit and another five writers with screenplay credit. This doesn’t count all the others who came and went uncredited and the many executives with “opinions” and eleven producer types credited on the film. That’s one hell of a mishmash of notes messin’ with the original story everyone liked in the first place when they bought it.

But in the end, all that tinkering with story and execution, no matter how many zeroes added to the budget, they got their butt kicked by a bunch of smurfs that edged them in the holier-than-thou boxoffice divinity! I even saw a tweet by Favreau congratulating the little blue guys for their “strong opening” weekend. He couldn’t believe it either.

Once again, William Goldman was right when he said “Nobody knows anything!” What a business!

One Response to Cowboys & Aliens & Smurfs?