An Arab Spring or an Arab Fall?

A man sets himself ablaze, a woman screams to the world of her gang rape, a 13-year old boy is mutilated and murdered—just three of hundreds of millions of Arab voices yearning to be free! To be free of what exactly? What is this surprising movement we have labeled the “Arab Spring” and can it achieve the hopes and prayers of its participants and fallen victims? Is this freedom movement working or failing?

After thousands of years of oppression, ruled by brutal forces throughout centuries of unspeakable violence, terror and injustice rained on its people as common occurrences, the Arab world is jittery with the idea of embracing a seemingly never-before-possible breath of freedom—an unlikely inhale of civilized self-dignity—an instinctual yearning for the previously unattainable, foreign concept of democracy: rule of the people, by the people, for the people. 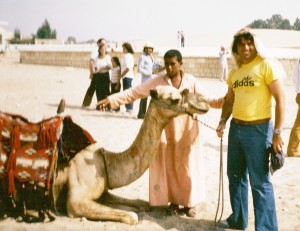 I was last in Cairo in ’78 to film for Universal Studios at the pyramids for the Battlestar Galactica TV series. I was born in Egypt and lived there till I was nine. I have a familiarity and appreciation of Arab culture, and I sympathize with this movement that has surprised the world. Though I cheer for their freedom and breakout from their medieval customs and beliefs, I believe this “Arab Spring” is doomed to fail this time around, at least for the immediate future. Maybe in ten or twenty years it will be their time, but not now. Why not now?

Whether through dictators, monarchies, or warlords, the ferocity of absolute rule throughout the Arab world has achieved endless poverty and numbing illiteracy. This suppression of the people has kept the powerful and wealthy in charge for generations, and unleashed their armed forces to spread fear and terror among a helpless populace. Though you’d think sending privileged children to the west for an elite education would bring back a kinder and learned generation, the heirs to sadistic rulers seem more apt to follow in their fathers’ footsteps once they’ve tasted the throne of power, and no progress is ever made. Arabs have long stopped to dream of a better world.

Although the most pious of believers, their medieval-based religion has not allowed room for progress or adaptation within a modern world. The ruthless oppression of women alone has made half of the Arab populace silent and compliant to absolute rule by cruel men. This is not a mindset for freedom of anything. Even in Tahrir Square, at the exhilarating moment of an awakening thirst for freedom, a few savage Arabs raped and almost killed an American journalist who was serving their cause while reporting their promising hope and revolutionary zeal to the world.

Democracy is not something western nations can bring to the Arabs as George Bush so mistakenly believed. Ten years later, Iraq is a mess and generations away from true democracy. Afghanistan is a nightmarish hellhole of depravity. Arabs are too mistrustful and culturally victimized with conspiracy paranoia; more than half of the world’s Arabs still think 9/11 was U.S. created propaganda. Though they may yearn for freedom and wish to join the modern world, a transformation of spirit and literacy from centuries-old acceptance of status quo must come from within their own visionary souls and emerge from their deepest gut-check courage.

They may rise and bravely fight to overthrow their ruthless leaders as they have in Tunisia, Egypt, and Lybia…but then what? Even after their most sensational victory, Egyptians are disillusioned about what to do now. Last week, their finance minister resigned over the army’s brutal treatment of dissidents. It’s easy to predict what’s next: the army will clamp down and a strongman general will take over, declare Marshall law for the good of the country, and rule with an iron-fist for years to come, or an ultra-religious group will take over and turn it into a similar oppressive theocracy as Iran. Either way, no real freedom or democracy in the near future.

Arabs will need to find their own Jeffersons, Franklins, and Washingtons to lead them out of their dark ages. They will need their own intelligentsia of ideas and brave leadership to inspire their own unwavering commitment to their own declaration of independence and their own bill of rights to break the shackles of tyranny, and finally bring democracy and modern life to the archaic Arab world. Centuries-old tribal rivalries and a hopelessly antiquated and subservient way of life cannot be changed in a spring or a year or even a generation.

Though the flame of liberty has been ignited, it’s going to take a lot more than a Facebook call for freedom…but they’re getting there..

One Response to An Arab Spring or an Arab Fall?