America loves its heroes. The ‘84 TV series Cover Up which I had directed had Bonnie Tyler’s “Holding Out For a Hero” as the show’s theme song which was a huge hit tune in its time and still one of my all-time faves. And now, there is a new hero in town. In case you live on Mars and haven’t heard, come see this amazing contestant on this season’s Dancing with the Stars.
His name is J.R. Martinez.

J.R. signed up to serve our country and ended up in the hellhole of Iraq. In 2003, while driving a U.S. Army humvee, he hit a landmine and was badly hurt. His recovery took three years of hospitalization and he underwent 33 surgeries, mostly facial and skin grafts. Incredibly, he somehow found the courage and resiliency to survive and to heal. And now, he’s dancing up a storm and showing America a true spirit of valor and a lot of what heroes are made of – in the hope we can somewhat identify with his noble heart and find a little bit of the magic dust of honor and decency in us. This guy has embraced the gift of life and celebrates it daily…as we all should. 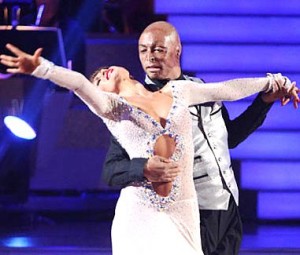 On Monday night’s show (10/3/11), he dedicated his dance to the fallen men and women of our armed forces who lost their lives in Iraq and Afghanistan. With his partner Karina Smirnoff, he pulled off a magnificent and emotion-filled rumba to Tim McGraw’s “If You’re Reading This.” It was an exceptional television moment, a beautiful and heartfelt dedication to his fellow soldiers killed in action.

J.R. knows he got a second chance at life, and he wished to honor the ones who didn’t. He was visibly overcome as he said, “Tonight was that moment. I’m on Dancing with the Stars, and I have an opportunity to really honor and pay a tribute to other service members and families that have gone on the same journey that I’ve gone on…but didn’t get a second chance.”

And in that unique moment, as our great country is so terribly divisive about everything these days, and still fighting horrifying wars costing so much in lives and treasure since the 9/11 tragedy, it felt like a magical moment – a breath of fresh air – when J.R.’s dedicated dance and his human spirit of courage and hope brought us all together in a unifying moment as one people, as one nation – as Americans – to remember and pay our respects to our fallen soldiers.